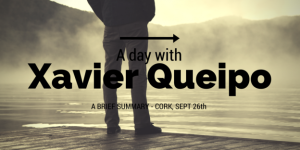 Galego en Cork:
“Last Friday we had the great opportunity to have Xavier Queipo in Cork and enjoy a full day of activities ranging from a Creative Writing workshop, a lecture on the experience of living in a multilingual city such as Brussels, and a seminar on the first full translation ever done of Joyce’s Ulysses into Galician.
We started the day discussing about microfiction (also known as flash fiction) and how to exercise one´s style by taking a story and rewriting it from different points of view. Xavier selected the microstory A filha do piloto japonês, by Angolan writer Ondjaki -available in his short story book E se amanhã o medo. The story is told from the point of view of an unknown narrator, who describes a scene in which a Japanese pilot says goodbye to their family for the very last time. During the workshop we focused in creating new perspectives and views of the story: one of us was now the pilot, the other, his wife or his daughter, and we also had to imagine what could have happened after Ondjaki’s story ends. All the nerves and self-consciousness about reading our own stories finally got transformed into laughter and the joy of realizing that we could create much more than we initially thought possible. It was certainly eye-opening for a lot of us. And you, do you think you could create new stories from inspiration on something you read?
Xavier Queipo has been living in Brussels for many years, and has thus experienced the life in one of the most multicultural and multilingual cities in Europe, and probably the whole world. Only in his neighbourhood, about a hundred languages are spoken, from all the European languages to many African or Asian languages as well. As a result, communication completely changes and, in a context in which originally one could have thought a so-called minority language such as Galician wouldn’t have had a place, the reality is that it is only one more member of an extensive family. What do you think? Would you try to continue speaking your language if it was considered a minority language in a context like this? Would you speak Irish in Brussels, for example? Or Galician?
As a part of the team of 4 translators who undertook the very significant task of bringing to life the first full translation of the Ulysses into Galician, Xavier Queipo gave us a fantastic insight on what the translation of a book of this calibre really means. Not only 4 different versions of each chapter were created, but also the team of translators had to all agree on all the proposed solutions. This titanic work allows us today to finally be able to read this classic entirely in Galician, after the great Galician writer Otero Pedrayo had shared his reading experience in 1926 by translating a fragment of the novel.”